Reviving this blog after being dormant for more than a year to invite you to my upcoming 4th solo exhibition, “Madonna Reimagined.” It opens this coming July 23, 6:30 PM, at Art Elements Asian Gallery in SM Aura Premier. The exhibit will run until August 09, that’s about 18 days to check out my latest collection. Join me at the cocktails on the 23rd, and please feel free to spread the word. For more updates and previews, visit my Facebook page. 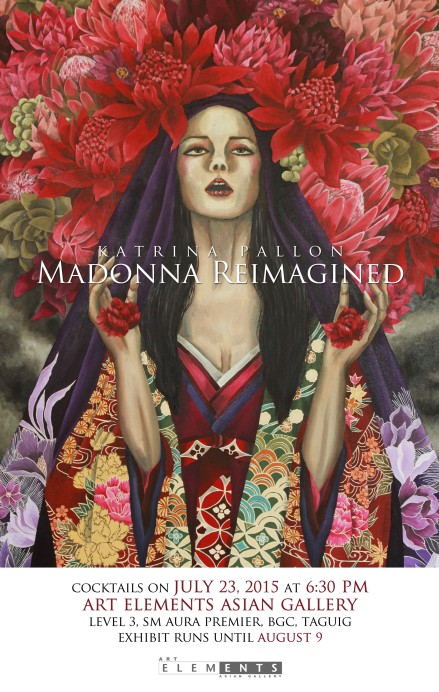 MADONNA REIMAGINED
The beauty of an unstoppable feminine force

A hauntingly beautiful figure, the austere representation of Mary has crossed the threshold from being a historical figure to an iconic heroine. It is perhaps her simplicity, vulnerability combined with the resounding strength and boldness of her actions that made her the immortal figure that she is today. The Madonna has long been a source of inspiration for many artists, having been resurrected countless of times within the delicate and deliberate hands of sculptors, poets, and painters alike.

The Madonna has long been portrayed demure, elegant, and maternal. The epitome of serenity, her smooth and youthful skin seemed untainted by the concerns, worries, and desires of the world. However, visual artist Katrina Pallon saw a different kind of beauty within her boundless eyes.

The Mater Dolorosa, also known as Our Lady of Sorrows, has long fascinated the painter who was mesmerized by the startling image of Mary with seven daggers unapologetically piercing her heart. Not long after, Katrina Pallon was enamored by an extraordinary figure. In a modest church in Parañaque, she was surprised to find the statue of a headless saint at the centerpiece of the altar. The headless saint stood proud and was known as Saint Denis, a 3rd century Parisian bishop who angered the local pagan priests having drawn so many conversions that they had him beheaded. However, the spirit of Saint Denis remained undeterred and he rose from the grave, picked up his own head, and walked six kilometers carrying his dismembered body part while preaching a sermon. A church was erected at the site of his execution to commemorate this plot twist of gothic proportions.

These images and subconscious fascinations led her to an assessment of the catalogued images of female saints and martyrs in her own memory. This eventually inspired her to create an image of the Madonna and the saints, not as seen as they are known to be but as a reflection of her own understanding of them.

Katrina Pallon used the language of the brush to retell a familiar and ageless story. Using lines and colors as her words, she shared her version of the life Madonna. Madonna as mother and Madonna brought to life in the virtues of all those who have perished in service to her name. Pallon has veered away from the traditional conservative portrayal, instead using the canvas to reflect upon her own appreciation of the figure, leading to the collection she has imparted to audiences today.

Behold the saints, martyrs, and the imitable Madonna in all her vibrant glory. Here, the Madonna is unafraid. Her emotions are oozing out of her body and she doesn’t hide behind conservative colors of beige and brown, opting instead to drown in a sea of wild flowers, in her hair, within her fingers, and spread upon her regal robes. Blood drips from her eyes, a scarlet trace of the suffering she endured as a pioneering woman of her time, unafraid to fight for her own beliefs. She is unafraid of her vulnerability, unafraid to weep, unafraid to divulge a pose of despair, knowing that these are not indications of weakness but assertions of her strength and values.

Surrounded by beautiful breathtaking details of nameless blossoms, her delicate face remains to be the epitome of feminine beauty. However, in the midst of the flora, her face has transformed into a strength shaped by suffering made beautiful by its triumph over it. Using meticulously drawn details in the clean lines of solid black ink, a captivating palette, and stunning aesthetics, Katrina Pallon has created a collection that serves as an ode to the beautiful, multi-faceted, and immortal strength of a woman.

The exhibit will be unveiled to the public on July 23 at Art Elements Asian Gallery, SM Aura. For more details, contact the gallery at (02) 519-9683 or email artelements@surfshop.net.ph. (Written by Hannah Jo Uy) 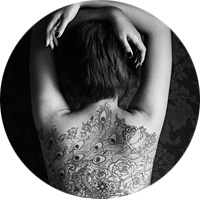