The type of music I am listening to at the moment I’m drawing greatly influences my work, especially when I’m being spontaneous. So this is the result when they decided to play Baroque music at the coffee shop I, Jooley, and Raymond were hanging out at after Jeet Kune Do class yesterday — Glamorous tattooed ladies in Rococo headpieces and garb. Yes, they did play Baroque music but I decided to go with Rococo because it’s whimsical and I wanted to play around with pastel colours. It’s the late part of the Baroque era anyway.

Therese. Yep, she has a back piece and a really tiny waist. 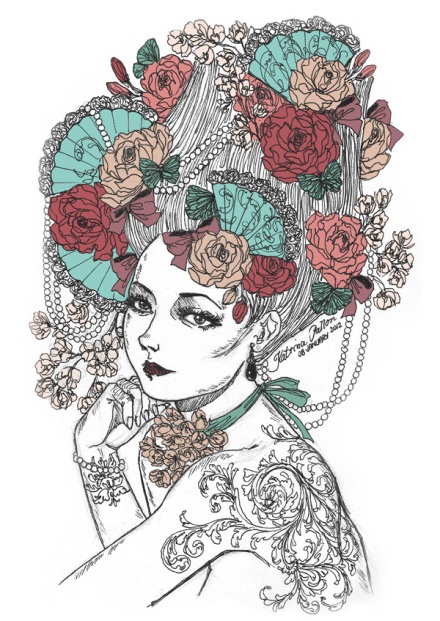 Charlotte. I had to name her after the French lady character from Samurai Shodown.

I’m translating “Charlotte” into a painting for my upcoming exhibit with Ponj Roco on February. I have 4 more canvases to fill in and she’ll be occupying one of them.

That’s it for Day 4 of my ongoing 365 Project. I’ve already made up for the first four days of the year I’ve missed, and I’ll be producing one work per day from now on. My aim here is that this project shouldn’t take too much of my time, so I allot 2 hours at most for this. There’ll be exceptions though for days when I don’t have my hands full or when I’m bored out of my wits, but expect those to be rare.

I should have named this project 365 Women! I think I’ll be accepting requests of the type of girls you’d like to see me draw from now on. 😉

East Asians have tales of celestial maidens who descend to earth only to have their wings (or garments that allow them to fly) stolen from them. Such themes are also prevalent among the Tausug and Samal people. One tale tells of a “Biraddali”, a skymaiden who uses a rainbow as a bridge to visit earth, whose wings were stolen by a mortal man to make her his wife. I have always interpreted these as stories of women reclaiming their power and freedom from the clutches of their captors, and making these men atone for their offenses to be worthy of them and their forgiveness.
Capping off Earth Day by sharing a detail of one of my pieces for @artmomentsjakarta which is to be rescheduled to a later date due to the pandemic. For this exhibit, I decided to depict women from Mindanao myths and folklore. This particular painting features Princess Lawanen from the Maranao epic “Darangen” surrounded with birds and tropical plants resembling fire.
Longing for the day we can fly around freely without fear of getting infected.
A detail of one of two paintings for a book cover art I was able to finish within the first week of the ongoing enhanced community quarantine. I consider the nature of my profession a privilege during this time — I am able to keep working and being productive despite a global pandemic. If you’re reading this, there’s a fair chance you’re in the comfort of your home, so count yourself fortunate to be able to stay somewhere safe while our healthcare workers are risking their lives at the forefront. That said, I hope we recognize whatever privilege we have and make good use of it by donating what we can to food drives and other such initiatives to help support them while keeping ourselves healthy at the same time. Stay safe, everyone!
Taking this opportunity to greet everyone a HAPPY INTERNATIONAL WOMEN’S DAY! 🚺 Sharing a commissioned portrait I recently finished. Blush Oil on canvas 16 in x 12 in 2020
Tres Calavera Catrinas (Wheel of Fortune) Oil on canvas 48 inches diameter 2020
An embroidered heart sits at the center of my painting currently on exhibit at @galerieanna.
Started National Arts Month aptly at the opening of @galerieanna’s “Floraison” yesterday. For this group exhibition, I decided to come up with a Dia de los Muertos-themed piece, limiting the use of flowers to just the subjects’ flower crowns and embroidered dresses. The gallery is located at The Artwalk of SM Megamall, 4th floor, Building A.
My dapper muse, Mang Carling, posing beside my painting of him for @sunlifeph’s “Portraits Beyond Lifetimes”. Proud to have painted this very inspiring financial advisor.